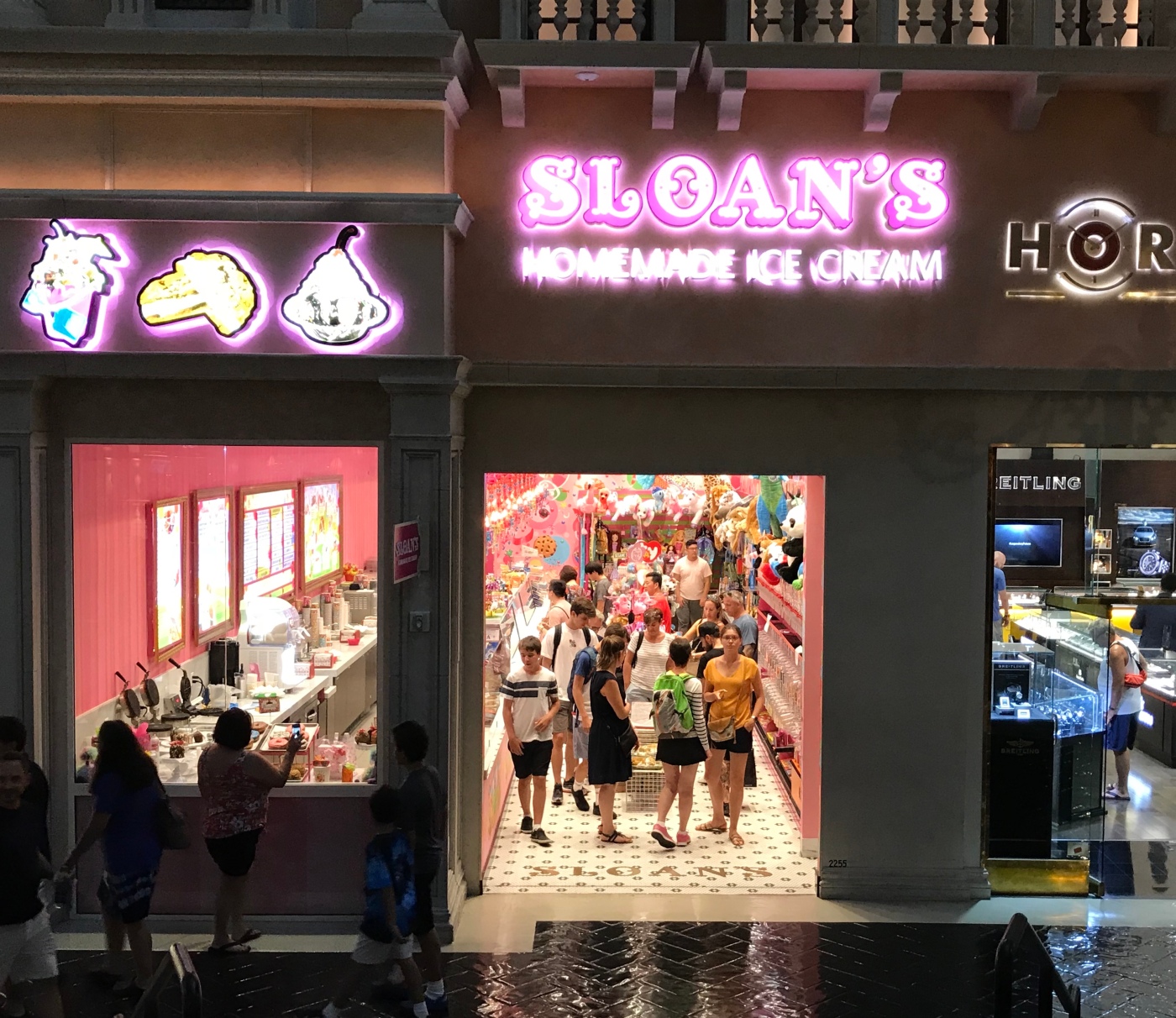 Summer in San Francisco is a paradox. The days are generally pretty cool and often foggy and grey. There may be a brief, glorious window of sun late morning into mid-afternoon (depending on what part of the city you’re in), and then the wind picks up and drags a fresh new blanket of fog over the city again. You hear about the “winter blues” back East; here in San Francisco, we are definitely afflicted by the “summer blues.”

In need of some real summer heat and sun, my husband and I took a quick trip to Las Vegas this past weekend. We got a bit more than we bargained for, with blazing hot temperatures reaching well over 100 degrees. But in a pinch, it did the trick, and if anything gave us a reason appreciate our more temperate Bay Area weather. Plus, it gave me a great opportunity sample some sweet treats in seasonally appropriate conditions.

Our adventure took us to Sloan’s, a franchise that originated in Palm Beach, Florida, and has several outposts in beachy locations throughout Florida and Southern California. The Vegas shop, located in The Venetian, is their first foray inland in the U.S. A visit to their website will reveal this was a logical move: “Welcome to the magic of Sloan’s…where fantasy becomes reality!” Given Vegas is one giant fantasy-land, this place fits right in!

This place is a complete shock to the senses. The shop is floor-to-ceiling “hot” pink, adorned with pink pinstripes, polka dots, and butterflies. Glitzy chandeliers pepper the cherub-dreamland painted ceiling. Gaudy gilded picture frames adorn every menu and piece of artwork on the walls. A rainbow collection of candy spans the full stretch of wall, and displays of cutsey plush toys compete for what little floor space is available for actual customers.

And then there’s the ice cream.

Even the ice cream selection is in technicolor. Flavors like Cookie Monster and Fresh Strawberry are as florescent as the walls. The 36 flavors of hard ice are far from normal – even the vanilla is Extraordinary Vanilla. 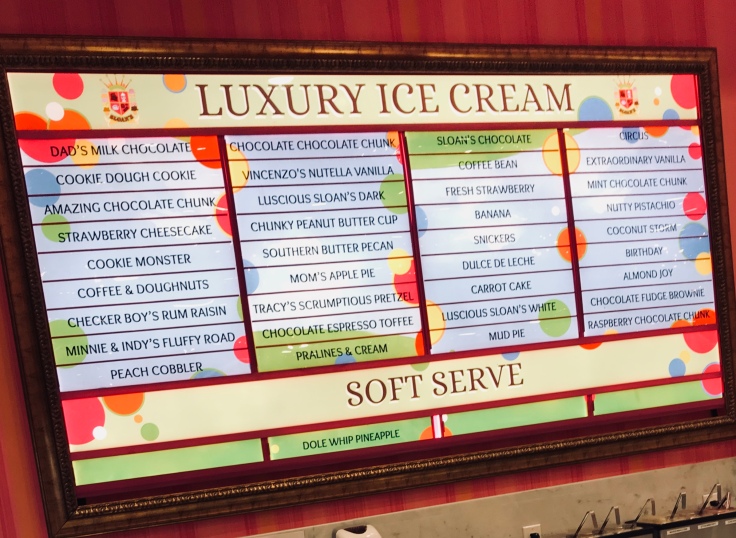 I was particularly drawn to the whimsical plays on “down-home” treats like Mom’s Apple Pie, Peach Cobbler, and Coffee And Doughnuts. 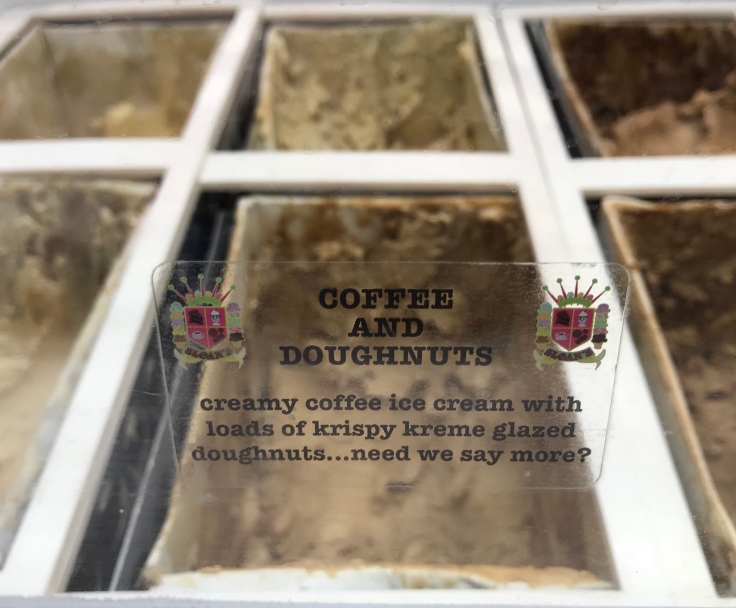 The Coffee And Doughnuts had a superbly strong coffee flavor, and was super creamy and rich. Despite the description, I wouldn’t say there were loads of doughnuts. That said, I expect I wouldn’t want much more, given they were of the sugary glazed krispy kreme variety.

On the other end of the spectrum was the Carrot Cake. (I let me husband taste test this one, as carrot cake isn’t really my cup of tea.) In this case, the proportion of cake to ice cream went to the other extreme.  It was tasty, but almost more cake than ice cream. This appeared to be true of many of the flavors in the freezer. To each his own, but I prefer a more ice-cream forward product.

Moms Apple Pie was certainly not my mom’s apple pie (though, to be fair, nothing ever is).  But it did a good apple pie impression. The base had a pleasant pie-spice flavor – a nice surprise when I expected plain vanilla. The overall consistency was quite a bit lighter than the other flavors we sampled, which was a welcome contrast to the other heavier samples. That said, it was still rich enough to give you a real sugar rush. It also had a much more equitable balance of chunks of pie crust and apples to ice cream.

I find fruit chunks in ice cream to be tricky business. Not done properly, they can be crunchy-frozen and flavorless, or strangely gooey or chewy. In this instance, I found the apple chunks to be a tad off-putting. They weren’t terrible, just a bit on the chewy side for my taste. My husband liked them, though, so it’s really a matter of preference.

Overall, it was tasty, but didn’t leave me feeling any sense of nostalgia for the real thing.

All in all, this was a fun stop and satisfied my need for a sweet treat on a hot day, but like most things in Vegas, was over the top and should be consumed in moderation!